Portiuncula Hospital Ballinasloe is an acute general and maternity hospital and one of the hospitals in the Galway and Roscommon University Hospital Group.

A Model 3 Hospital that has; 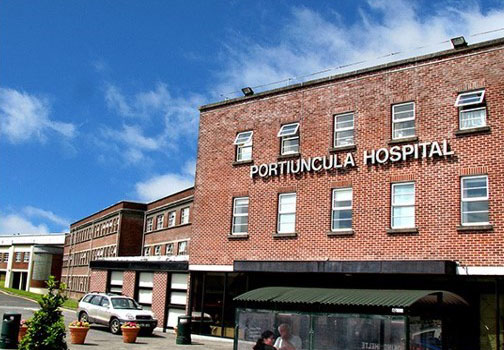 In mid-March it became apparent from hospitals in Italy and Spain, that the on-going high demand for pipeline oxygen was posing a major risk to the continued, stable delivery of the clinical services of these hospitals.

On the weekend of 29/30 March 2020, the media reported a major London hospital almost ran out of its liquid oxygen supply.

On 31 March 2020, an NHS Estates and Facilities Alert was circulated about the oxygen supply issue.

Portiuncula caters for both COVID-19 and non-COVID-19 patients and operates streams for adult, paediatric and obstetric patients.

A Risk Review was undertaken by Portiuncula University Hospital and MIPS in March 2020 due to the evolving COVID-19 pandemic and unprecedented demand for oxygen.

The hospital had bulk liquid oxygen plant limitations and lacked confidence in the surety of the national liquid oxygen supply in light of the impending increase in COVID-19 patients.

The Oxygen Capacity Plan (OCP) was designed to protect the needs of Theatre, Maternity and Emergency departments, including both COVID and non-COVID patients. The OCP would provide capacity and robustness of supply (to cater?) for an increase in admissions in the short, medium and long term. 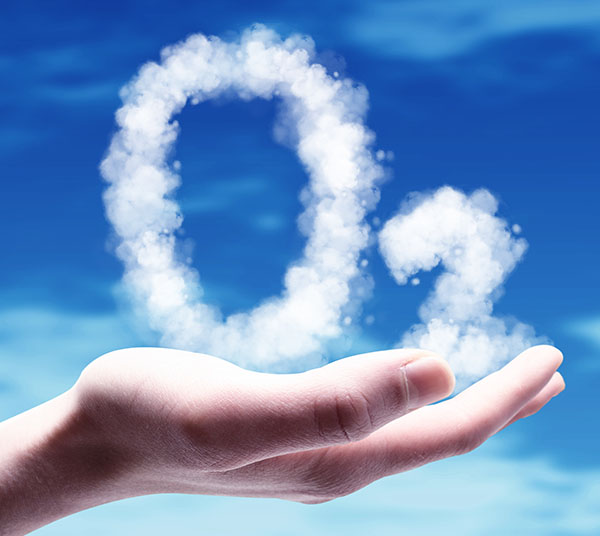 There was an urgent need to increase their ICU bed capacity, focusing on patient safety.

They needed to increase their ICU/CCU bed capacity by 8 and planned to do this in 3 phases:

There was a national request for an additional 17 ICU beds. Portiuncula was limited only by the number of available ventilators (13). 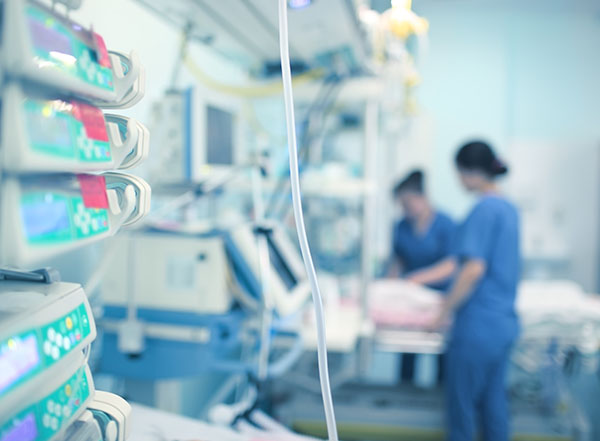 The medical oxygen was supplied through a piped distribution system from a Vacuum Insulated Evaporator (VIE) with adjacent 2×5 back-up J-size cylinder manual manifold.

The maximum flow available was 833 L/min. In the event of a surge, this would only meet 58% of the projected demand, based on the increased use of ventilators, coupled with the fact that the VIE had only a 40-hour capacity if delivering at maximum flow. This would result in daily refilling of the VIE.

The hospital had concerns regarding running the system continuously at maximum output, as the system may cease to operate with pipes freezing completely.

Portiuncula believed that it would be prudent to mitigate against any possible shortfall in the delivery of liquid oxygen due to the increase in national demand.

There was also a national shortage of oxygen cylinders.

With the risk of adverse weather events affecting the road network and distribution, it was necessary to instigate a robust back-up system. 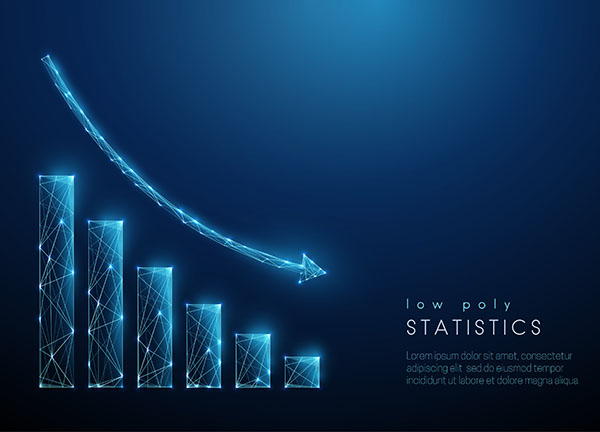 For the security of oxygen gas production, MIPS’ response was to supply and install a Duplex Inmatec Model 8500 Medical Oxygen Generator Plant in a custom-designed plant room. This solution guarantees the supply required, in compliance with 7396-1:2016 for medical gases pipelines, and meets European Pharmacopoeia oxygen purity of 93%-95%. 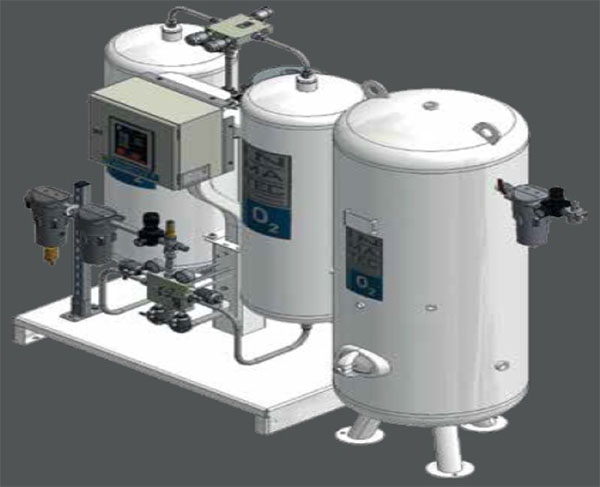 Each generator is supplied with compressed air using:

The air is now ready to supply the generators. 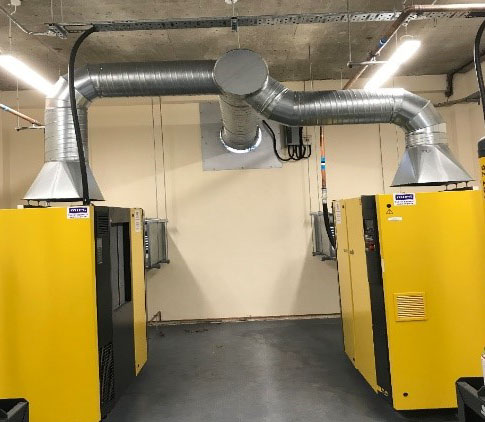 Each compressor can supply either or both air receivers.

The air receivers can supply either or both oxygen generators.

One or both generators can supply the hospital piped system.

All MIPS pipework has been installed, jointed and tested complying with HTM 02-01 Part A. 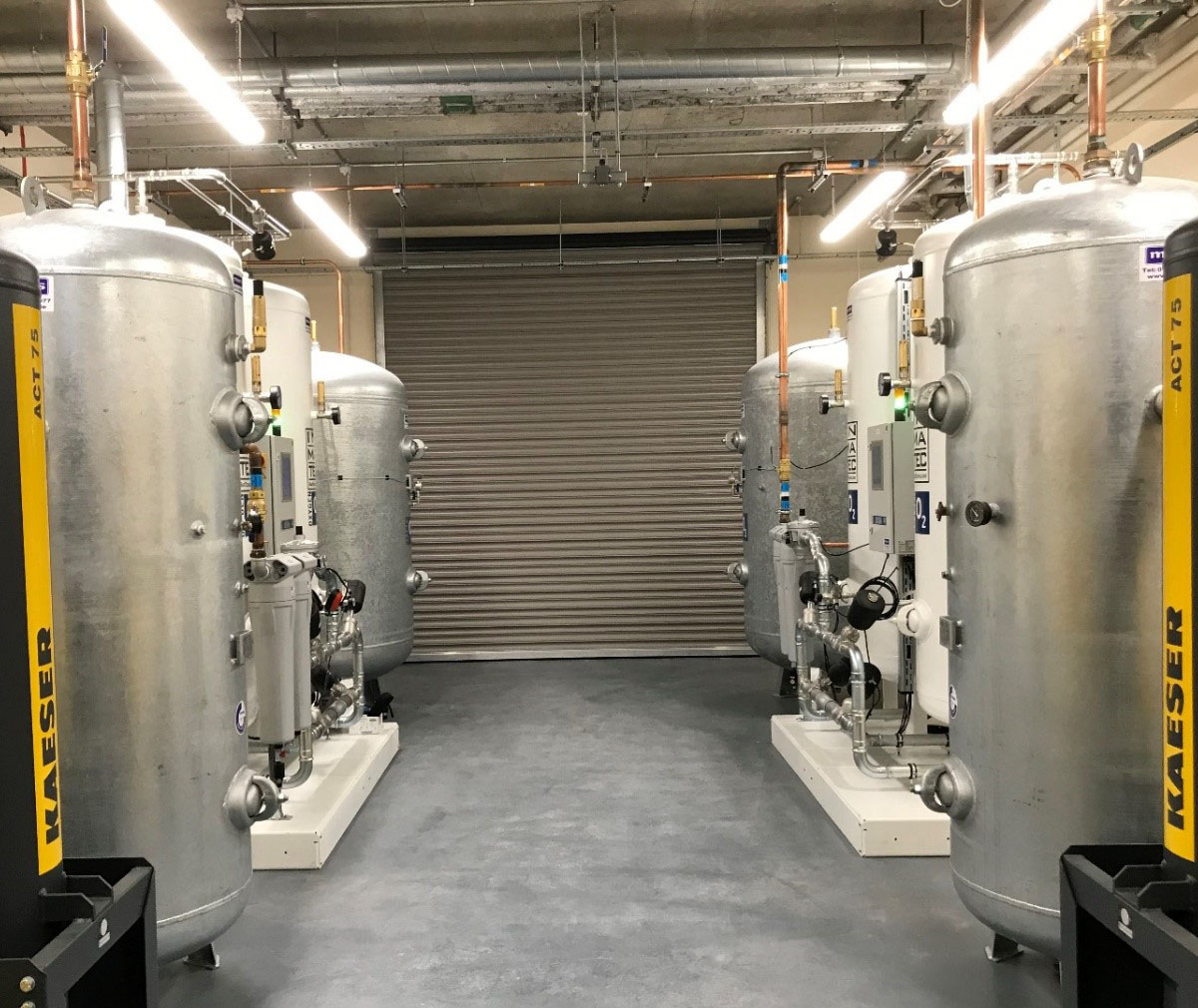 Each generator on this assembly is an Inmatec Model 8500 and is capable of generating;

Each generator on this assembly is fitted with a 2000 ltr oxygen receiver and the generated oxygen gas is stored in this pair of receivers at around 6 Barg. From the receivers, the gas is piped to the final generator filters and pressure control stations. 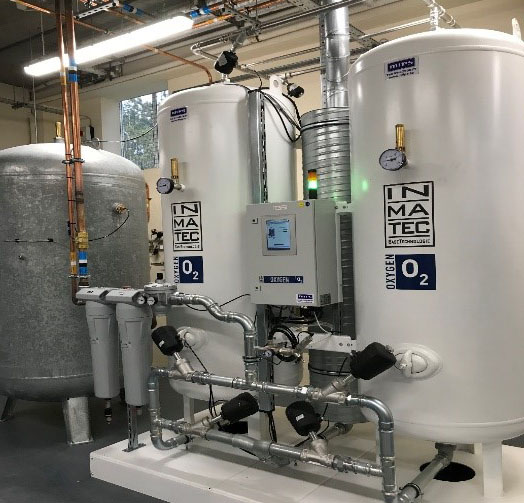 Downstream of each oxygen receiver, the gas goes through the final set of Inmatec filters and Pressure Control Stations before supplying the gas to the MIPS Duplex Pressure Reducing Station.

The Inmatec station incorporates an automatic shut-off valve that will close should the oxygen purity drop below a pre-set level. At Portiuncula Hospital, this shut-off setting is currently 92% purity.

A flowmeter is incorporated downstream of both Inmatec valve stations. In Portiuncula Hospital, this flowmeter is electronically linked to the graphics screen on generator number 2 to show the real-time oxygen usage in cu.mtrs per hour.

The MIPS Duplex Pressure Reducing Station regulators are set at 4.3 Barg., and oxygen is piped to the MIPS Valve Control Station to interface with the hospital oxygen mains. 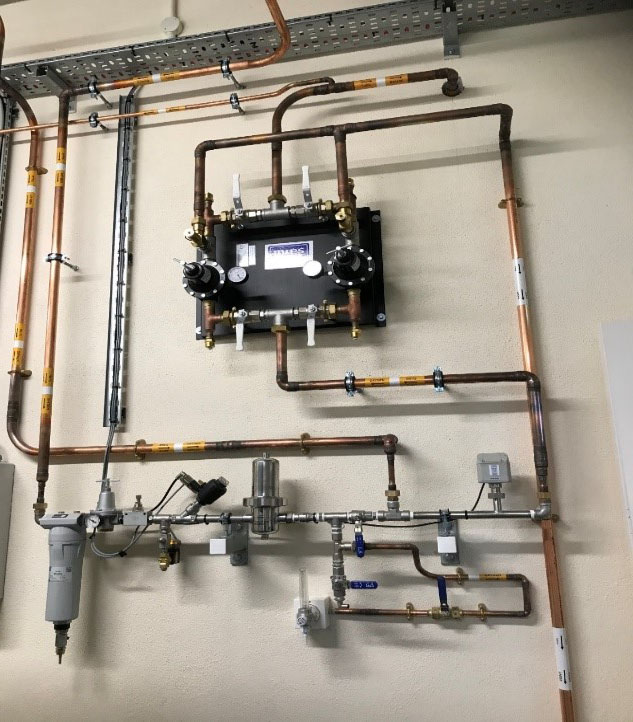 The front screen graphics show the status of the generator towers as they alternate between pressurising, resting, decanting and purging.

By pressing the easy-to-read buttons at the bottom of the screen, the user can view; temperature, oxygen receiver contents pressure, oxygen % gas purity, dew point and the flowrate being used by the hospital. 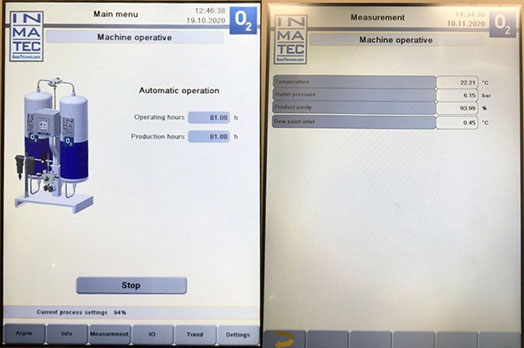 A backup cylinder manifold has been installed adjacent to the oxygen generator plantroom.

This is a 2×8 Automatic Changeover Manifold complying with HTM 02-01 standards, holding 8 J-size medical oxygen cylinders on each bank.

The manifold is set up to come on-line automatically if a problem occurs with the supply from the generators.

The manifold will also come on-line to assist the generator(s) during a period of high flow demand i.e. in excess of 74 cu.mtrs/hr. (1,233ltr/min). 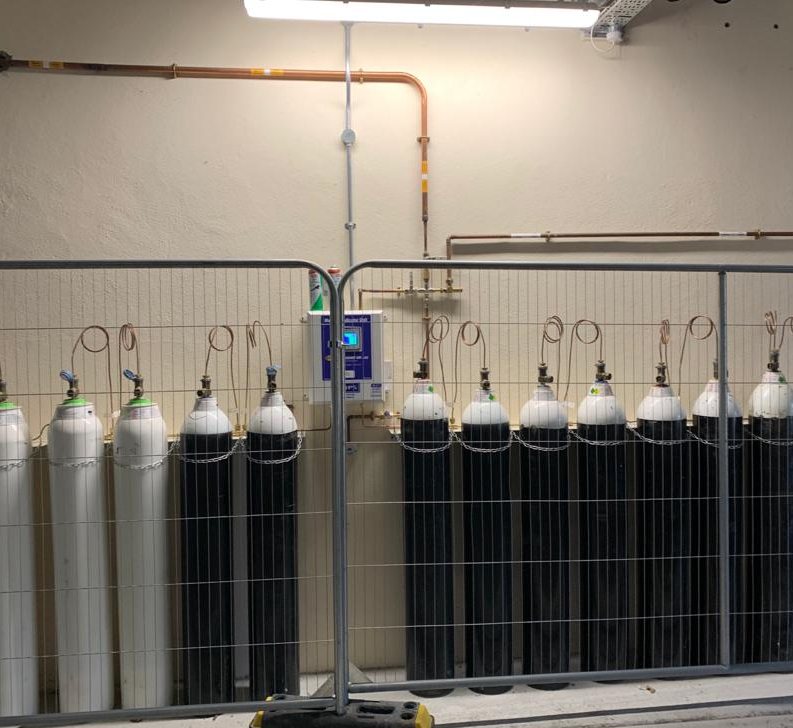 The designed and fitted Valve Control Station allows the hospital to select the mode of oxygen supply preferred for the hospital wards or Operating Theatre Department.

This valve station allows the hospital to select one of 3 separate modes of supply;

To assist staff to set up the required mode of supply, three separate valve charts with photographs of the required position of the set of diverting valve handles are fitted beside the assembly. 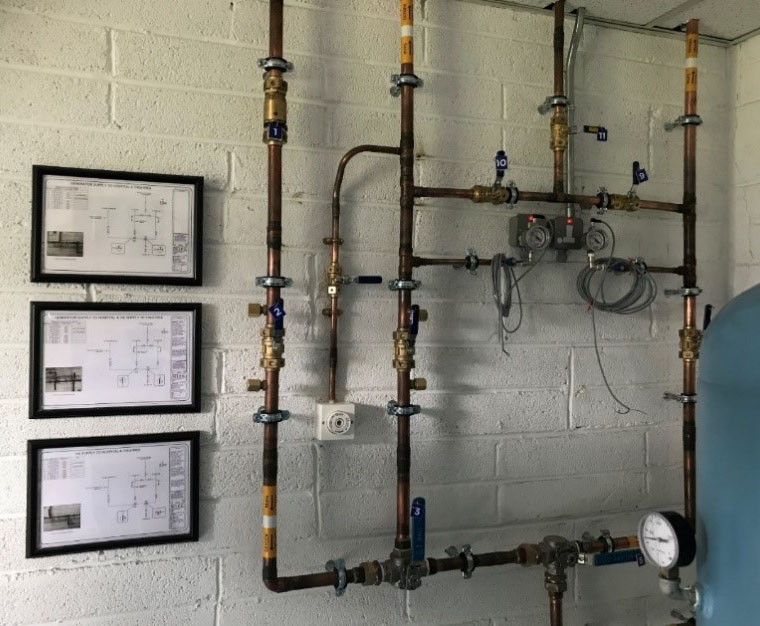 Before the oxygen generator plant went into use, the hospital was using 3 to 4 units of liquid oxygen per day, according to the readings at the VIE contents gauge.

During the recent relocation of the existing VIE and its associated control panel and back-up cylinders, the oxygen generators were used to supply the hospital wards. This enabled the ongoing groundworks for a new 50-bed ward block to continue on schedule. 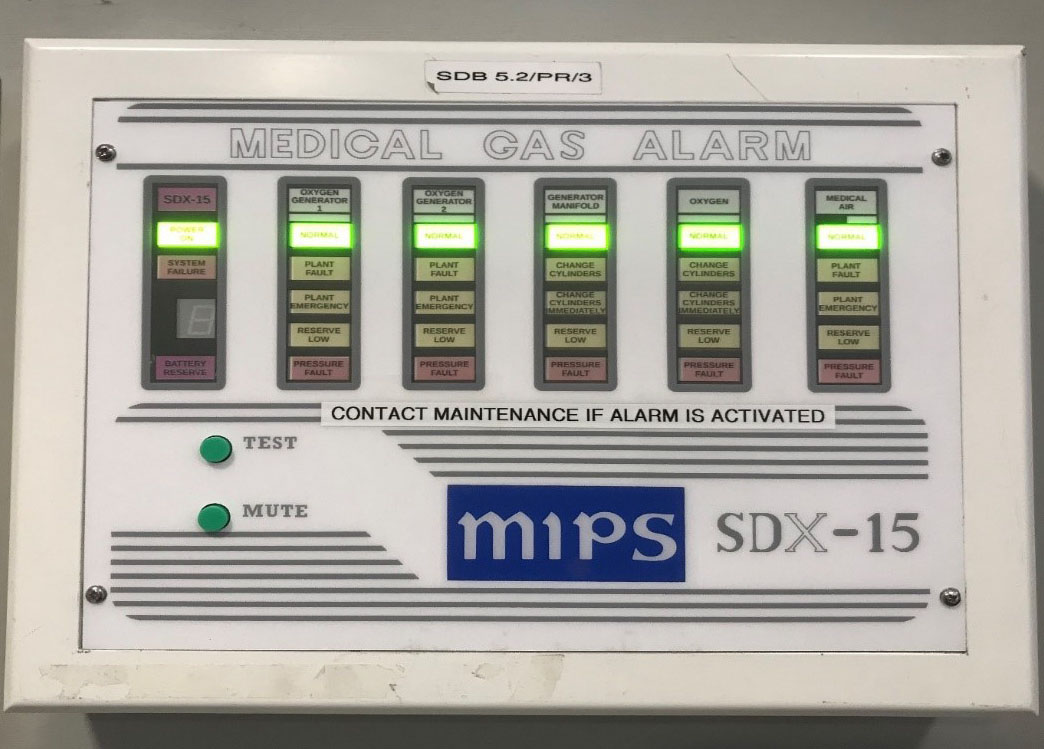 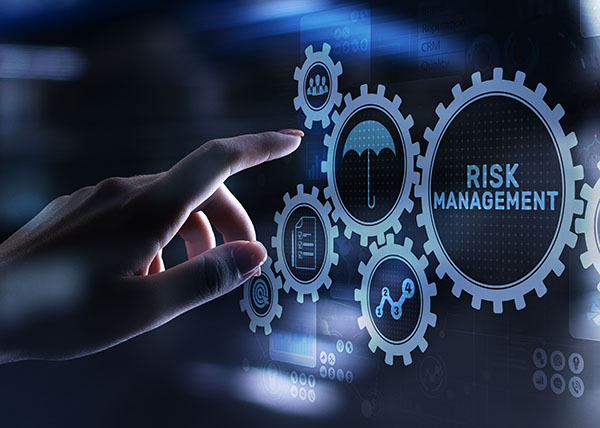 MIPS was delighted to be involved in this time-critical project at the start of the COVID-19 pandemic.

This project is another example of MIPS going above and beyond the initial brief, producing an outcome that the client was very happy with and was delivered both on time and on budget, without interrupting the hospital’s critical functions.